Coming Up Next: How do Doctors Talk about the Drug Pipeline? 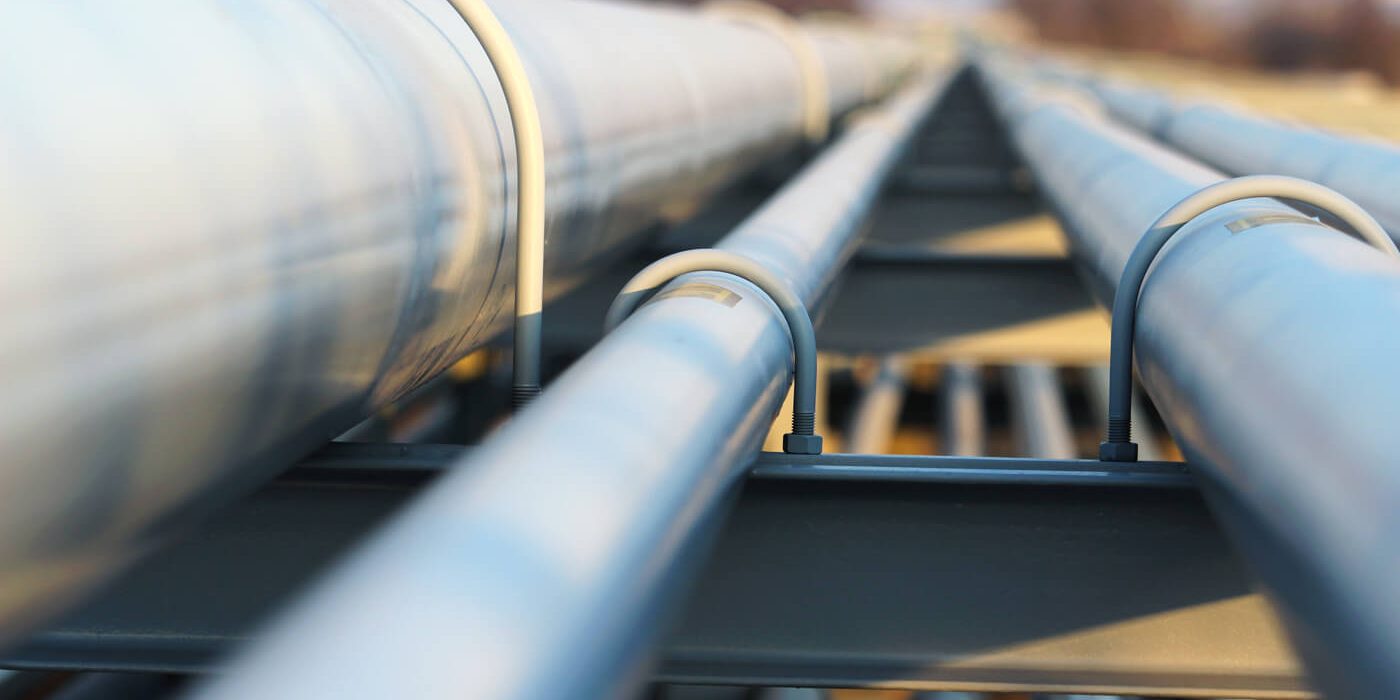 When we talk about the drug pipeline, we’re talking about the future.
Pipeline drugs are often the newest medical advancements that scientists are still in the process of testing for safety or efficacy. As doctors can’t generally prescribe pipeline drugs, I wasn’t expecting them to come up very often in in-office dialogues. But as I’ve found listening in to Verilogue’s medical conversation database, doctors are still talking about these upcoming treatments with patients, and they have a lot of different reasons for doing so.
Verilogue’s database currently has about 200 recorded in-office visits that feature discussion of the drug “pipeline.”  Remember that last month we found that over 400 in-office conversations included the word “zombie,” which might lead us to believe that pipeline talk is less frequent than, say, patients talking about how they feel like characters from The Walking Dead. But it’s also important to note that discussions of new treatments arise with a lot more lexical variety than just the word ‘pipeline.’

One of the reasons that these conversations can sound so different from visit to visit is that doctors are frequently referencing each of the different phases that lead up to a drug’s launch, such as clinical trials, study outcomes, and FDA approval, all while using their own language.
I started to wonder if pipeline talk could be so varied because it was serving an alternate pragmatic function across types of in-office visits. In linguistics, pragmatics refers to studying the aspects of language that depend on context.  Imagine you want to borrow money from someone: How would you go about asking your boss? Your best friend? A complete stranger? We often switch up how we speak because of the unique social context, even if the request is the same. Likewise, you might speak differently to your doctor, and your doctor speak might speak differently to you depending on certain contextual factors, like your knowledge on the subject or your comfort level.
In fact, if we look at how doctors are speaking about the drug pipeline by disease state, we’re able to see why some of these very similar conversations look so different from one another. In order to find out how and why these conversations are unfolding the way they are, I compared instances from two disease states where the drug pipeline is commonly come up: Parkinson’s Disease and Multiple Sclerosis.

A lot is going on in Multiple Sclerosis research these days, which means there’s more opportunity for doctors and patients to discuss what might be coming down the line.
As I looked into MS dialogues specifically,  I started to notice some interesting trends in how that pipeline conversation was taking place. Take a look at some of the excerpts from recent MS visits below: 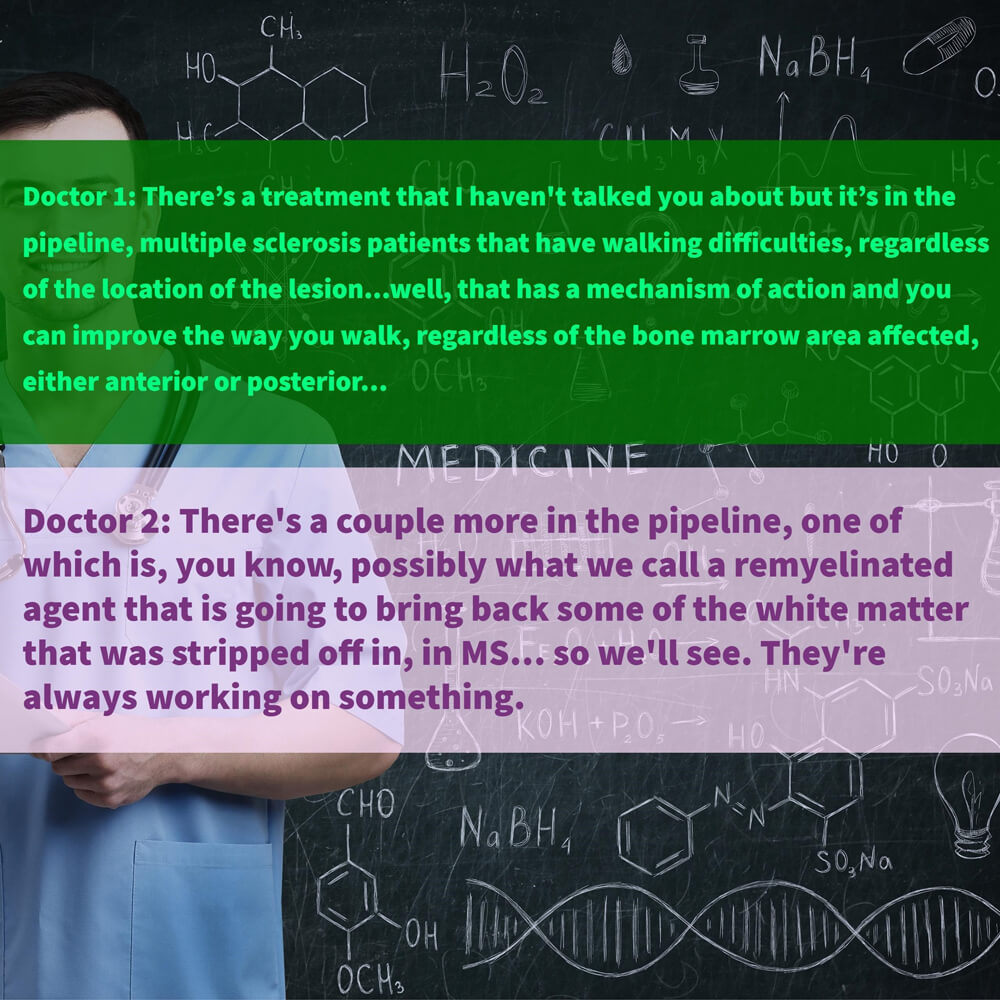 It’s a mouthful. Physicians describing the MS drug pipeline are exceedingly specific about what’s coming down the line. It’s not uncommon for them to include complex, clinical-sounding explanations of what these future products will be and how they are going to work:

Doctor: “That has a mechanism of action… either anterior or posterior…”

Throughout our database, we also see that doctors in MS visits are by far the most likely to name the specific compounds that are being developed. Even when upcoming compounds aren’t named, doctors seem to enjoy ‘geeking out’ with MS patients about how the new developments in the field will be different than the options that are already on the market:

Doctor: “One of which is, you know, is possibly what we call a remyelinated agent…”

The detail and specificity that these doctors provide suggests a real eagerness and excitement to talk about new advancements in MS. This in turn, helps to create an atmosphere where complex knowledge is shared with the patient.

In visits with Parkinson’s patients, we also see many doctors talking about the drug pipeline. Those conversations, however, tended to sound a little different: 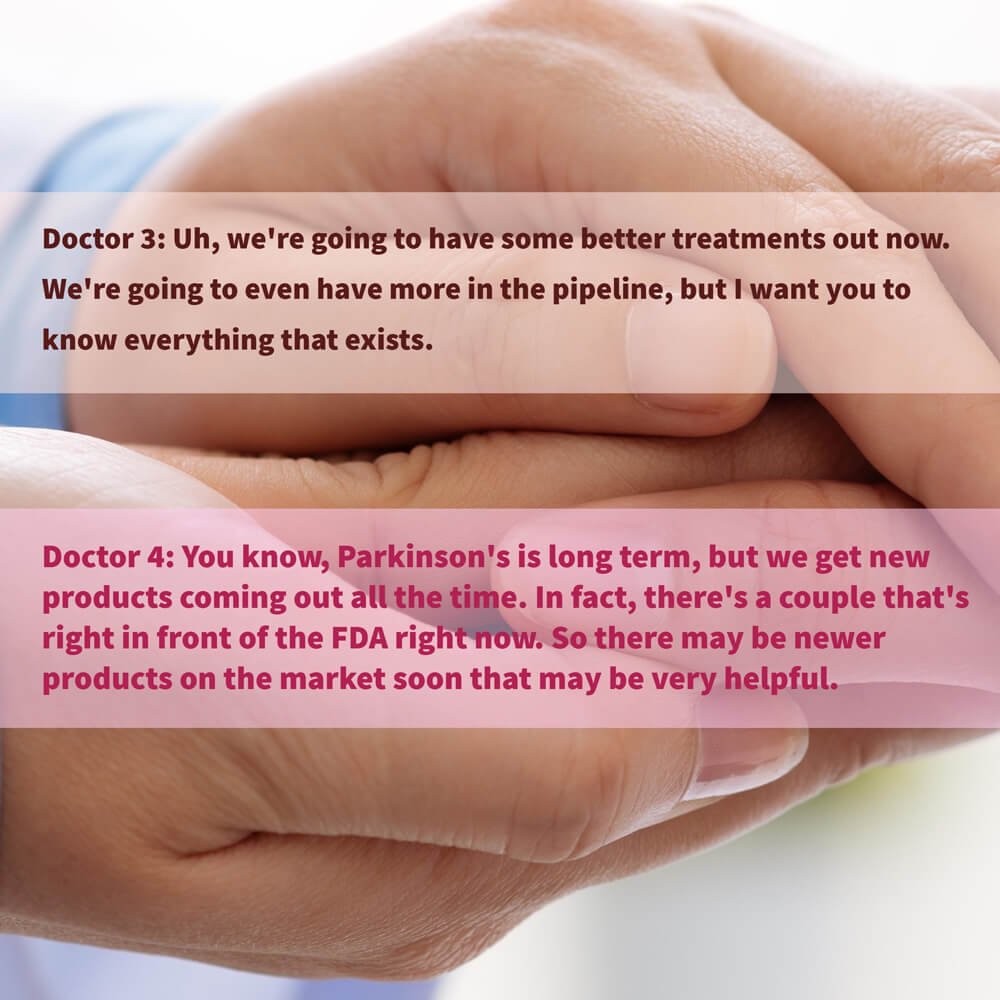 They’re more comforting. This kind of pipeline talk isn’t necessarily specific or complicated. Doctors in Parkinson’s visits don’t usually name what kinds of treatments are actually in the pipeline, but instead refer to it more generally. There’s also markedly less description about how these treatments are going to be different than what’s already available. More importantly, we see that physicians are referencing the Parkinson’s pipeline in order to build up a sense of trust with their patient:

Doctor: “I want you to know everything that exists.”

The primary goal of pipeline talk in Parkinson’s visits is to help both the patient and physician start to look forward. It’s not a coincidence that a lot of these discussions come near the end of the visit, once the patient’s more immediate options have been laid out. As physicians and patients try to work towards the best possible solution, it’s comforting for them to be able to point to new advancements that will be available in the future:

Doctor: “…We get new products out all the time.”

In other words, the pipeline discussion here is accomplishing more than just letting patients know that more research is being done. It’s also establishing a sense of hope, and letting the patient know that their doctor is still looking out for them.

I find it fascinating how talking about the drug pipeline helps doctors accomplish so many different interpersonal goals. Most importantly, of course, these kinds of conversations provide information to patients and help keep them informed and involved.
The specificity of the pipeline conversation may depend partially on the disease state, as certain areas of medicine advance at different rates than others. But as we see in Parkinson’s conversations, specificity in the pipeline discussion may not help achieve another sort of goal, like strengthening the relationship between a patient and their physician. Instead, it’s more important for those physicians to establish a sense of trust and hope with their patients, and talking about the pipeline helps them do just that.
Neither approach is necessarily better than the other. Instead, these doctors are responding to the social context of the visit and helping to support each patient as best as they can.
So the next time you see your doctor, consider asking, “What’s in the pipeline?”
You might be in for a fascinating discussion.

Mary-Kate Hedrick is an Analyst of Linguistic Insights & Analytics at Verilogue. She completed her MA in English Linguistics, focusing on discourse analysis. She now spends a lot of the day thinking about how doctors use metaphors to turn ‘medicalese’ into a productive dialogue with patients.