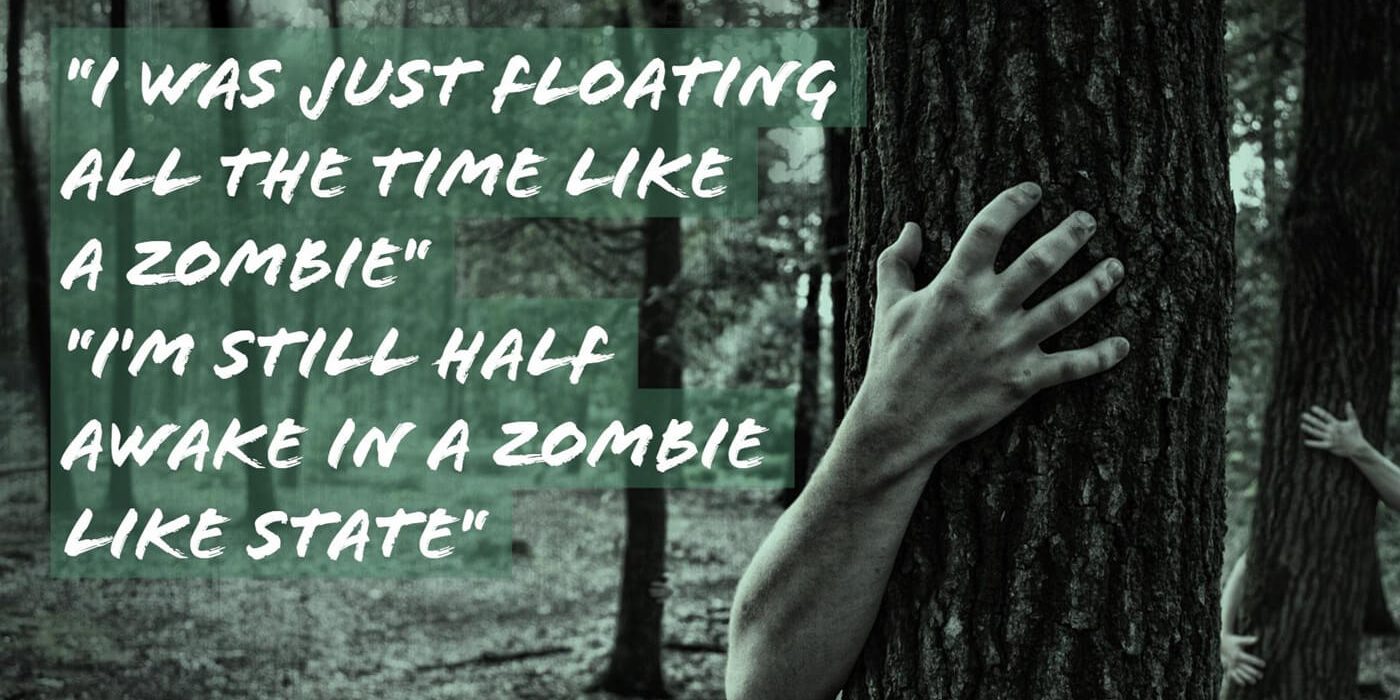 The impending return of AMC’s The Walking Dead on October 23rd, with its portrayal of flesh-eating, swarming zombies, or “walkers” as they’ve been coined, has me thinking about how we use that term in our daily lives. Or more specifically, what do patients and physicians actually mean when they say “like a zombie”? Because hopefully if that’s the case patients are not referring to some nightmarish experience wherein they sought after a cannibalistic treat.
In Verilogue’s database, a quick search revealed that we have dialogues with OVER 400 patients and physicians using the term “zombie” in some way to describe symptoms or side effects.
This terminology pops up in a wide range of disease states, including asthma, diabetes, and eczema, but it is most commonly referenced in appointments about mental health.
The top 5 appointment types where you or your physician may use the term zombie:

This distribution isn’t quite unexpected, especially when we take a closer look at the context in which “zombie” comes up. Patients are using the term to not only describe disease symptoms (morning stiffness, the daze of a fever), but also to talk about treatment side effects (both the experience with and potential for).

PT: I feel like a zombie but a zombie that talks…I’m not doing good and I’m wasting my life.

Physicians similarly use the term during dosing discussions as a sense of reassurance to quell the fear that the suggested treatment would make the patient less of “who they are” or who they see themselves as.

DR: There are plenty of people out there that walk around in a zombie state and they feel great.  I don’t want that for you.

So what does it mean?

Patients and physicians often use this term to refer to sedation or being on autopilot. It’s a lack of the senses in that you may have no idea of your surroundings and might not react to them normally. They also associate it with a lack of personality.
It’s definitely not the highly functional, musicality inclined zombies of Thriller…

Or the aforementioned walkers from The Walking Dead that Rick and the crew are always on the run from:

One aspect of its meaning that’s consistent is that there is an idea of when you are like a zombie you have “no feelings,” which would perhaps go along with historical use of the term in that zombies are perceived as not being in control of themselves of their actions. However it doesn’t really fit with the aggression we’ve come to associate with the undead.
The “zombie” descriptor from patients actually more aligns with its original appearance in American film. Zombies weren’t flesh-eating (read more about the history of zombies here). But as it seems, this out dated use is becoming more culturally irrelevant as zombies turned from simply cursed people, to brain craving, to now generally hungry for all flesh, animal & human alike.
And this use is appearing more frequently across context, like in news headlines: “Zombie drugs? Florida man stabs couple, eats dead man’s face in ‘random’ attack”

Regardless of the context, what’s REALLY fascinating is that HCPs and patients agree most often without question and simply reply with a minimal response:

So what’s the point? Well, we often see meanings are created in and built upon their social context, which is why “zombie” can have multiple meanings for multiple instances and we as listeners don’t need to clarify, “wait, do you mean you were actually undead and feasted on flesh”?

Linguistically speaking through and beyond the historical semiotics of the term, this would imply that there is an indexicalized meaning for the descriptor “zombie” in that in this particular context (i.e. the medical appointment) it has a different meaning and referent beyond the pop culture use. Moreover, physicians and patients seem to be operating in a community of practice wherein the meaning of “zombie” is shared and requires no further explanation. That is until it changes, as meanings do. Until Mrs. Jones saying “this medication really has been making me act like a zombie” now translates to uncontrollable aggression and flesh eating. Then we might have a problem.
In a broader sense the use of the term is also an intriguing example of how, as David Chandler so eloquently puts it, “Meaning is not ‘transmitted’ to us – we actively create it according to a complex interplay of codes or conventions of which we are normally unaware.”

To end and as a last shout of to the fans of The Walking Dead, I’ll leave us with another example of how experience can layer in subtexts to basic phrases we use in our daily lives, maybe even unbeknownst to the other party in our conversation:

Perhaps the zombies, excuse me, walkers of The Walking Dead and their fearless counterparts have infiltrated our perception more than we know…

Beth is a Senior Analyst of Linguistic Insights and Analytics at Verilogue. She’s dedicated to exploring how language operates beyond the simple content of our talk to influence our perceptions, identities, and relationships.

<strong>Verilogue</strong> offers fly-on-the-wall access to candid healthcare conversations between patients and their healthcare providers. Verilogue’s trained linguists analyze these dialogues using their expertise, and provide unique insights for our clients. Reach out with questions or comments via the below form!.