The Power Behind Hope: Magic versus Miracle 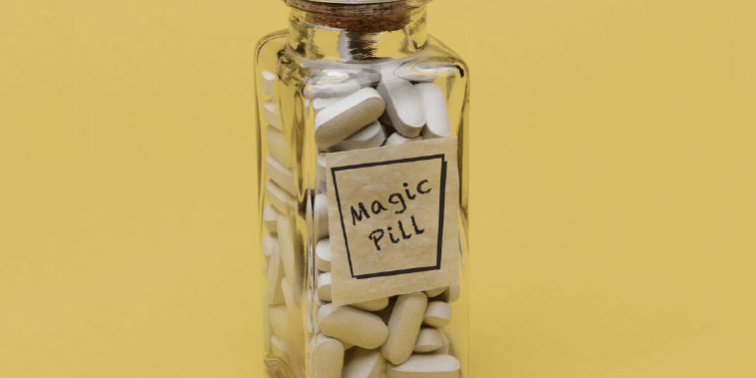 What is the “magic pill”? Does it exist? The (very) short answer is no. But don’t worry- “miracle pills” might! So what’s the difference between a magic pill and a miracle pill, and how do doctors and patients feel about them?

According to a Google Ngram count of print resources from 1800 to 2000, the concept of a magic pill is a familiar one that has been in common use since the early 1860s. One of the first instances is from 1804, in which there is mention of a pill that young ladies could use to gain the favor of a man. The usage increased around the 1970s, with a noticeable increase from 1989 to 2000. Instances of “miracle pill” also increased in the 1970s, though very rarely before the 1950s. A 1957 Science Digest Article mentioned “a new ‘miracle’ pill that’s been doing wonders for women suffering with pre-menstrual troubles”.

The phrases “magic pill” and “miracle pill” can be used in many different contexts, from fantasy storytelling to modern day healthcare. It can be something that actually works, or something that is unachievable. It can also be a part of a ruse or con, just like Jack’s magic beans (too simple to come without consequences but too appealing to pass up.) At its core, it is a simple solution to a complex problem.
So how is it actually used in the context of modern healthcare? In over 100,000 conversations, “magic pill” is used 137 times , and “miracle pill” is used only 23 times. Across disease states and types of conversations (diagnosis, treatment discussion, follow up), “magic pill” is used positively only about 10% of the time, whereas “miracle pill” is used positively about 65% of the time.
Positive uses of “miracle pill” are mostly patients discussing the efficacy of treatments. Patients say that treatments “seem like a miracle pill”, or “I call it my miracle pill” when describing how well they are doing on a certain treatment. For patients, finding a treatment that works for them, potentially one that has cleared up symptoms that they may have been struggling with for a long time, is something miraculous.
Positive uses of “magic pill” are similar to “miracle pill” for patients. However, doctors use “magic pill” a little bit differently. While doctors were less likely to say that a patient’s treatment was a “miracle pill”, they do sometimes say that treatments a patient is about to start or that just got approved has the potential to be a “magic pill”.
In most cases, however, a “magic pill” does not exist. Doctors frequently say “this isn’t a magic pill” when introducing a new treatment, to control patient expectations. A new medication may not be the simple solution to the patient’s complex problem but that doesn’t mean it’s not a good, effective treatment. By using the phrase “magic pill” as an unachievable, non-existent ideal, doctors set realistic expectations: treating their disease is science, not magic.

The connotation, or the idea or feeling that a word invokes in addition to its literal meaning, plays a huge role in the way language is used. While “magic” and “miracle” may be similarly defined as an event or occurrence with an explanation beyond human understanding, the words carry different connotations.
The Oxford Dictionary defines magic as “having or apparently having supernatural powers”, originating from Greek magike, and has maintained the often negative connotation of the supernatural, witchcraft, and trickery throughout its history. “Miracle”, on the other hand, is defined as “a remarkable event or development that brings very welcome consequences” and is from Middle English: via Old French from Latin miraculum, meaning “object of wonder”. Taking into account strong connotations of the divine, the essence of a miracle is in its wondrous and welcome outcome.
Essentially, magic happens outside of the natural world and is intended to trick you into thinking something improbable has occurred. Describing something as magic places the focus on the occurrence, and emphasizes the fact that you don’t know how it happened. Describing something as a miracle, on the other hand, focuses on the outcome- the effect that the occurrence has on your life and the positive feelings that accompany it.
For patients who are dealing with a disease that has an effect on their daily life, it’s important to have realistic expectations. Magic doesn’t exist, and the concept is at odds with the scientific reliance on reproducible evidence. In healthcare, then, a magic pill cannot exist. A miracle pill, however, can and does exist. A miracle is a wondrous and welcome outcome, and miraculous outcomes can occur even when the source is known. Patients have many hopes and goals for treatment: symptom relief, increase or maintenance of quality of life, a way to manage their disease. These hopes can all be realized in their response to a medication- and that can be a miracle.

Janine Robinson is an Analyst at Verilogue. She has a Master’s Degree in Linguistics from San Jose State University, and has dedicated her life to figuring out why we say what we say when we say it.

Verilogue offers fly-on-the-wall access to candid healthcare conversations between patients and their healthcare providers. Verilogue’s trained linguists analyze these dialogues using their expertise, and provide unique insights for our clients. Reach out with questions or comments via the below form!